I have not blogged for the last 10 days - simply a lack of time - I don't know how I ever fitted in going to work! Despite not 'going out to work' the way we used to we still look forward to weekends, which we normally reserve for more leisurely and social activities. Last weekend was no exception with a visit to the Saturday market in Apt in the morning, after which we always stop for our customary beer, whilst in the afternoon I was on car washing duties (something I rarely do these days)and Karen watched the Rugby. In the evening we went to friends, who live in part of the Gite complex we originally thought we would buy, for dinner. They are establishing a business exporting Provencal building materials to the USA.
On Sunday we went to Lunch with some other friends who have a beautiful, restored house with several acres of Olive Trees. It really was what Sundays are all about - sitting outside in warm early spring sunshine, eating great provencal food with good wine & company.

One down side of living abroad is not seeing as much of close friends & Family although many have already visited. This brings me to the subject of children. Most people reading this know Richard well, but perhaps less about my daughter Sarah.
Richard has been working as the assistant editor on a forthcoming film 'Rise of the footsoldier' which will be released later in the year and previewed in London. The trailer which he also edited is being shown at the Berlin Film Festival. I know he has been working flat out since Christmas working almost every night, all through the night. This picture is of Richard with Billy Murray who is in the film. 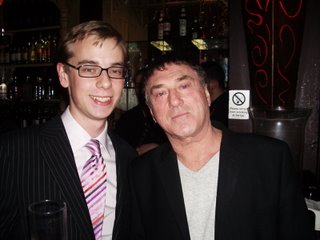 In between this he has also been creating websites for a number of celebrities and seems to have carved out quite a succesful career and both Karen & I are very proud of him! That's my boy!! He hates me saying that! He is coming out here next week for a couple of days and skiing with us in April.

Unfortunately I have not seen Sarah for almost 10 years now - which is incredible, and hard to believe. Richard took this picture which I really like. I do occasionally speak with her on the phone and I hope that one day curiosity will get the better of her and we will see each other again. She is currently working in a restaurant having completed her A levels. 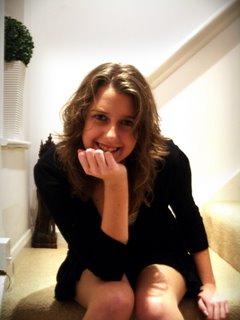 This past week has flown by. Much of it has been taken up with me negotiating with our chosen builder who we have yet to formally appoint.It has not been for the lack of trying. We had 4 quotes, two from large constructors and two from private builders. We would like to use 'Thijs' a Dutch guy who has been in this area a long time and has built a house for friends nearby. His quote is though substantially higher than the others. My efforts to lower these have so far failed as each time he comes round he finds differences in the build specs and so insists that he will build us a better house! I think he is right but I can't help but want to negotiate and have so far only managed to persude him to include about 15000€ worth of extras. We parted company Friday evening with me trying to persuade him to upgrade our shutters, which he resisted - seems like I have almost met my match! Anyway we are going into battle again Monday afternoon. He is quite a loud chap but I think he will do a good job, we can communicate (he is bi-lingual)which is really important as we will be project managing the construction programme.


We had quite a shock on Tuesday - our Electricity bill arrived - 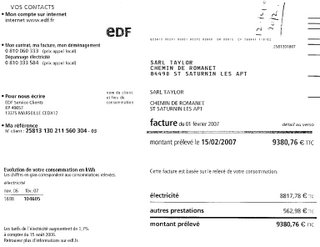 this is over Six Thousand pounds for two months! God I hope it's a mistake. I think and hope that the readings when we first moved in have been transposed. EDF are coming out in two weeks - well this is Provence. Can you believe we went to the bank to cancel the standing order and they have already debited our account with over 23 € for doing this! A letter to the manager will be forthcoming.

We took our Mercedes in for it's first service, at 29,000 Kilometres, and were pleasantly surprised at a bill of 180 pounds. Whilst the car was in the garage we went shopping catching the tail end of the sales. This was the first time we had been to Avignon for several months and the first time we had bought any clothes for ages! being a little more circumspect these days we were rather chuffed with our purchases - Karen buying a pair of trousers and a blouse for 45€ and me two shirts , trousers and slippers for 40€ - real bargains!

We are back on the house search front for a new client. With 1 to 1.3 Million € to spend he is coming out Saturday week to view. So we are off viewing on his behalf this week.

Yesterday, we had a real treat! Truffle Hunting & Lunch. 11 of us headed up towards Mont Ventoux. Unfortunately the weather was more like the North Moors than Provence!
Truffles are selling for 700€ a Kilo, abt 500 Pounds. 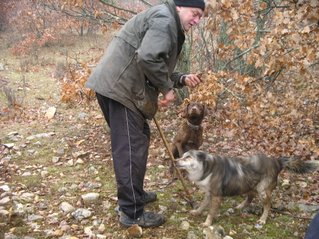 The farmer took us with his Dogs, one of whom is a champion, to his land and with in minutes the dogs were finding the truffles. They are just a few inches under the soil, and grow on the roots of truffle Oaks. 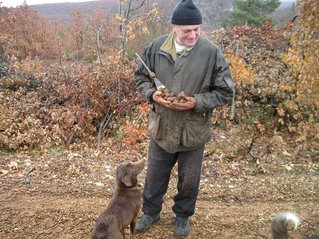 After this we returned to the Farm house for an apperitif of Kir with a wild Mushroom hors d'oeuvre . We were then served a fantastic meal comprising of Lambs Lettuce salad leaves with Truffle shavings. Next we had Scrambled Eggs with Truffles!, then mashed Potato topped with, yes Truffles and then seperately Roast Lamb (reared on their farm). After this we had Brie filled with Truffle and finally Ice Cream with No Truffle! This was all washed down by Copius amounts of Vin rouge, with coffee and a Digestif, all for 40€ a head. 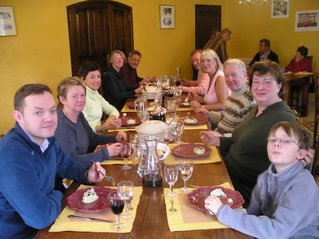 What was an eye opener was that the farmer collected over 500 pounds of Truffles in the hour we were out with him, they entertained us on produce all produced on the farm (except the wine) and everything was paid for in Cash - No cards , no wonder he was always smiling!
Sunday today - managed to walk 10 Kilometres this morning, now time to relax , we are watching the first series of 24 - It has been doing the rounds here with the Ex Pats! before a busy week ahead, French lessons, house hunting etc......
Posted by David at 3:08 pm