Another busy week has passed, life really does seem to be flying by! So much so that we have given ourselves a good talking to and are determined to get up earlier and fit more in to our day! One of the ongoing problems is that we usually get to places 11ish and by 12 they are closing. So we must either go earlier or later in the day.

We returned the water butt! Much to the amusement of the staff and customers in Bricolage. They made us stand with it in the entrance, causing great interest! 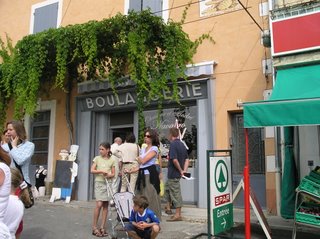 Tuesday is market day and I had to queue at the Boulangerie for my daily bread!

I have mentioned French banks before. Let me re-iterate - never complain about your British bank again! Credit Agricole, one of France's largest banks is regionalised, so when we pay a cheque in here it is rejected as our account is in Calvados. We managed to get the cheque traced and cleared for which I had to pay 3.90€. So we opened a new account here. They want 34€ for each debit card, and 9€ for what they call 'opening the door' in other words allowing direct debits to your account, and that is for each one you set up! Day light robbery is an understatement.

It was Karen's birthday Thursday, the 24th, we went to Aix en Provence for lunch then to the Cezanne exhibition (He was born, lived and died in Aix). Karen has always wanted a Fiat 500 and she got rather excited when we exited the restaurant - this picture was when I told her I had not bought it for her! 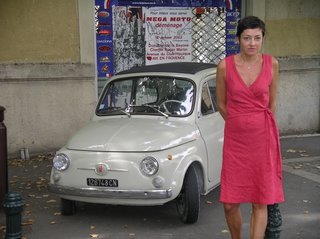 We had friends to supper Friday evening, a nice way to start the weekend. My Saturday went downhill early in the morning when our Dutch builder arrived with his estimate to do all the work on the Villa. I had to explain we wanted to refurbish it not rebuild it! Back to the drawing board!

Well, today is Sunday, time for some more work on the garden. Later some friends who we have made, who are shortly leaving for Australia are coming round for a BBQ so better go get some beers in the fridge. 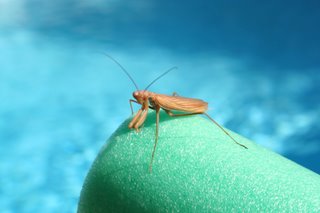 Do you like our Sufing Stick insect - we caught him riding the noodle in the pool!
Posted by David at 10:51 am