About 2 weeks before we moved we visited France Telecom to transfer our telephone and internet on the 26th. I also took the opportunity to upgrade my internet connection from 1 meg to 8. Well I write this almost 3 weeks later as we have only just been re connected! Initially they refused to put our line on until the old owner allocated his number to his new address, which was when he got round to it and then due to storms we had to wait 15 days to be put on line - one of the joys of France!
Our move on the Wednesday went well, the cats were highly inquisitive but delighted with the garden, the removal guys were great and with the exception of 1 item all of our belongings came out of 10 months storage unscathed!
On the Thursday we collected Martin, familiar to many of you and a welcome visitor ( and friend) to us. We whisked him from the arrival lounge at Marseille to Ikea and various other retail stores before arriving home in the late afternoon to enjoy the pool and garden. It was a hot balmy evening. 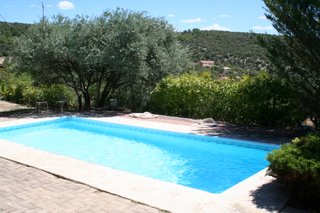 On Friday we set about unpacking boxes, lunch was served on the terrace where we have a view of the Luberon. It was cloudy , hot & humid. In the distance we observed the dark skies and listened to the sound of rumbling thunder. Lighting lit the increasingly dark sky. Gradually the storm approached , and within minutes the rain began to fall. For 3 hours we were engulfed by the most torrential and unrelenting rain. 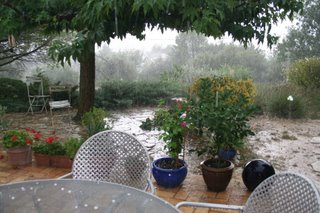 The Thunder was terrifying as was the lightening. We soon realised our new house was struggling to cope with the deluge. The Garage took in water ( where many of our belongings were still in boxes), the side area was like a river leading thru the workshop and store and as the rain fell it swept much of the garden rubbish that had built up over the last 2 years to the pool! 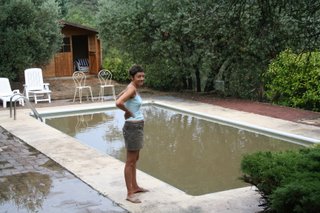 About 5 pm the storm eased and I had to go to Apt, about 4 miles away. The roads were like Rivers with torrents of water coming off the Vineyards with the ground simply unable to cope with the deluge. When I returned though an hour later the road was dry with steam rising leaving a rather eerie atmosphere.
We quickly realised our drainage was insufficient to cope with the rain that can fall here although many locals are saying it was the worst storm in 20 years. Great timing!

Thankfully Martin was here not only to help with the clear up but to put a calm reassuring perspective on the whole picture - for us it was a low point - what had we done, But next day despite the pool looking like a bath of Cadburys chocolate it was to work on the garden and under the guidance of several good friends we eventually after 5 days managed to restore the pool to its former glory.