Feeling like a stalker I once again laid in wait for the post lady at Rue Pasteur hoping she would deliver our long awaited planning permission (it was being delivered there as that was our address when we submitted the planning) but as yesterday, nothing arrived. So after lunch (the Maire's office only opens in the afternoon),I turn up asking to speak with Pascal the planning officer. I am shown thru (walking past the great man, the Maire, at his desk!) to Pascal who assures me he posted the approved planning consent on Monday. So where is it I ask? He directs me to the Post Office to see if they have it. On entering (I was hoping it would be empty) I wish everyone 'bonjour', which is normal here and when I get my turn ask if they have a letter for me from the Maire. I am not sure whether I should be pleased or not but they already now who I am and my name - thats another story!
Anyway the answer is no but the very helpful lady offers to call Pascal at the Maire's office. It goes with out saying that two of her colleagues also became involved leaving other customers queueing curiously! Despite Pascal's assurance of posting it, it gradually became apparent that it had not been posted and then to his surprise he found it under his desk - there it was - no wonder the post woman never brought it!! So we have it, planning to build a 3 bedroom, 3 bathroom & 3 reception room house where we will live with 2 attached 1 bedroom ' gites', which will share our pool. 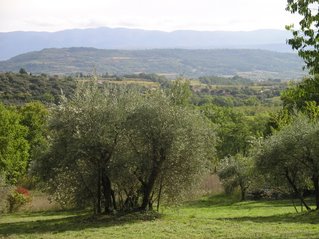 This house will be on the land pictured and slightly lower down we will build a second 3 bedroom detached house with it's own pool - reservations for 2008 now being taken!
Posted by David at 6:19 pm