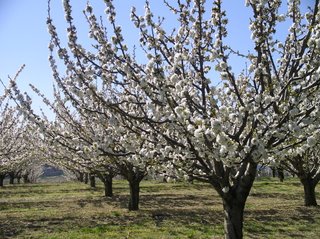 Since we returned from skiing in the Alps just before Easter, Spring has firmly arrived with warm sunshine, temperatures in the 70's and at last no fires are needed or thermals! The area has been a blaze of colour with fabulous blossom on the Almond Trees followed by the Cherry blossom, and now poppies are springing up daily. As are tourists thankfully, the Germans are here, (getting their sun beds!), Dutch, Swiss, French and Belgians. The English come May onwards.

I have mentioned that we have been trying to buy some land. I am pleased to say that my training as a negotiator appears to be paying off and to quote my dear Estate agent, Romain, ' we appear to have found a solution!'

It appears that this land was put up for sale a year or two ago; A Parisian couple promptly agreed to buy it and after several months found that there was a problem on drainage and also access. It had been zoned and advertised as two plots, in total abt 1.2 acres. You can only build two houses if you can obtain mains drainage as it is not big enough for two sceptic tanks, due to where they have to be positioned. The access problem stems from an Irish lady who has built a house behind. The Geometre, who is responsible for plotting out the land made an error and gave her part of the land that is the access drive to the plot. Not a problem, she could you grant a right of way? But No, she does not want to. So we understand the buyers gave up and walked away after 8 months. 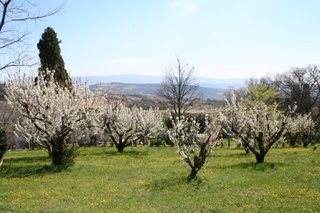 The sellers, who are French and who have owned the land for years approached the Irish lady about the access. She firmly told them she would not relinquish her right. Her son then came in with a low offer on the basis nobody else would buy it. He is a developer in Ireland & Florida and already owns a house here with his 'Blonde American' Wife. This infuriated the sellers who then put the matter into solicitors hands as it is illegal in France to block a right of access to another persons land. A meeting took place with all the parties and their lawyers resulting in the Irish lady placing two large boulders in front of the drive! Nice touch!

By chance the Taylors come along! We are told there was a problem with access but the agents have a solution i.e. the court tribunal would find in favour of the seller, trouble is this takes up to two years! So one Friday evening, appropriately St Patrick's Day, we are in the local bar and in comes some rather cheery Irish folk and a blonde American! After one or two Beers I take him aside and make him aware that we are the latest buyers trying to acquire the land in front of his mother! We meet the next day to discuss a proposal which in principal is not beyond our agreement but the conditions are, including his mother signing off our plans before submitting to council! This is our dream home not hers!! So we leave the door open and agree to reflect.

In front of our plot is another plot owned by another sister of the family we are buying from. It fronts a quiet lane and also enjoys a view of the Luberon as well as facing South and is just over half an acre. We decide that if we bought it we could then create a drive and access to our larger plot.We could also build an additional house to let or sell. So we make an offer and after a bit of wrangling agree a figure. We have also managed to negotiate with 4 other home owners closeby to access their drainage!nice thought eh, so we have that sorted too.

On current timescales we hope to submit plans in the next 6 weeks and then it takes 2 months after which another 2 months for objections so with the best Provençal timing we may start building by the end of the year and move in towards the end of next or early 2008! So to keep us out of mischief we have agreed to buy a 1970's (yes that great architectural period!) villa. It has 3 bedrooms, 2 baths, just under half an acre with pool and a view of the Luberon. Needless to say it retains many classic 'period' features which we shall be replacing! The system here is easy, we agreed the price Tuesday and will exchange next Wednesday. It is though expensive with the agents earning 6 percent (I got this down to 4) and the government taking 6.5 percent 'Stamp Duty'.

Our French lessons continue with our one to ones often being reduced to hysteric laughter, whilst the weekly school visit is a bit like going to the dentist for an extraction! Still we have managed to get ourselves this far and with the forthcoming project will no doubt soon add some more colourful words to our vocabulary! 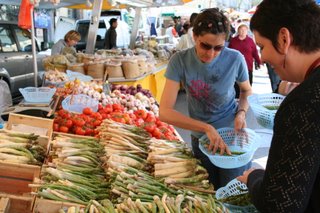 Despite France being a largely Catholic country they do not celebrate Good Friday. Easter Sunday & Monday though they do, and it is an opportunity for families to be together rather than for retailers to sell as many Easter eggs as possible. 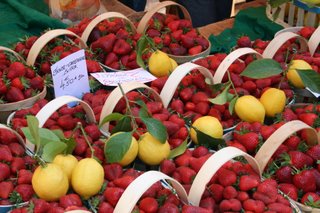 Our boulangerie is quite superb and on Easter Sunday, like most Sundays I had to queue to buy our bread and pastries, the latter being a weekly treat. They offer the most amazing choice and we buy daily, it really is a staple part of the diet and I challenge you to find an overweight Provençal person! At 10am, the village square is a hive of activity, by 1pm it is silent as people eat and rest. By mid afternoon it is alive again until aperitif time at 7. These French, they have their priorities right!