This is the Hebrew word for ' written' suggesting things in life happen for a reason, our paths are set etc.

I feel it's been that kind of week.

On Monday I had my first 'solo' French lesson, we are now doing an hour each on a one to one basis. Plus of course we go to 'school' on Tuesdays. After, we worked on the garden where we have a large Chalet, 6m x 4m. I thought it was in good condition but like everything here it has been neglected and the roofing felt is torn so that is my next task. We also had Patrick, the electrician round who kindly condemned our electrics! Looks like the budget is wrong aagin!
Several queries have been raised on our planning applications, these include requiring attestations on the drainage and access, suggesting the main house is bigger than the allowed 250 Sq Metres and that the pool houses must be connected to the house! Politics! so we have a meeting with the architect to agree who will do what!

The roof on our Mercedes has continued to leak so the car is booked in Wednesday for 2 days. We set off at 8am - early for us, to Avignon. After collecting a courtesy car, we head off to meet Bernard, who we met whilst stranded in a restaurant during a storm in Vaison. 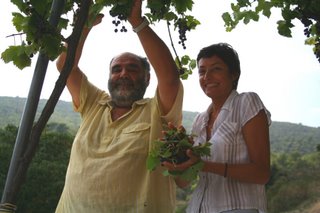 He is a fascinating, larger than life character (speaking 7 languages and a suberb artist!), born in Tunisia from where he and his family fled in the early 60's when he moved to Paris. He has lived in New York, Brazil and of course London, where he had a business making Jingles for Radio etc.

He and his wife have bought and refurbished a farm house, which is set in about 30 Acres where he has planted 1200 Olive Trees. Before lunch he took us on his tractor around the Olive Grove. After we had lunch, most of which had either been pulled out the ground that morning (lettuce, juicy, tasty tomatoes and peppers), or picked from a tree (figs), we chatted about so many different things, it was a very relaxing and enjoyable day. We left clutching grapes and home made Tapenade, stopping at a Vineyard on route home for a tasting and small purchase to keep the cellar topped up!

On Thursday whilst Karen had her French lesson I had a meeting with a Pool company to look at some work on our current pool and get quotes for the new ones. After we had to go to the bank where 'cheery chops' insisted on us waiting to see him just to transfer money from one account to another! Banking.......

In the afternoon we headed back to Avignon to the joys of the DIY shops to order Bathroom tiles, radiators etc. Mercedes called to say the car would not be ready! Thankfully we had to come to Avignon anyway, we were going to the opening of a new exhibition at an Art Gallary, afterwhich we headed back towards home stopping at ' La terrace' in Bonnieux where we had one of the best Pizza's ever!

We were up at 6.30 Friday, something of a record! and off to Marseille where I had a meeting with Home Hunts, who I am about to start working with. It is a City we have not explored. It is the largest City in France after Paris. 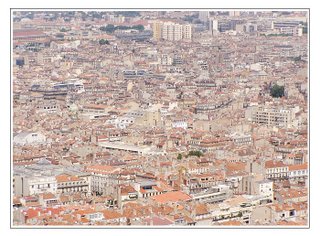 The traffic was busy, like driving in to London. I left Karen to go and look round. When we met up an hour or two later she had been exploring the contrasting streets that this lively City offers on one side with the likes of Prada & louis vitton and on the other, poor immigrants selling their possessions on the streets. 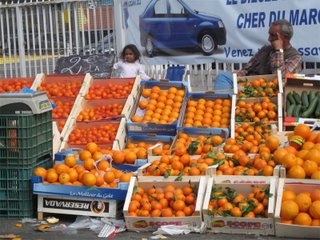 The markets were incredible with a vast Algerian quarter where women almost fought to buy their produce.

We took lunch at the Cafe du Banque, a superb Bistro with an effecient crew of waiters serving the regular customers enjoying the warm Autumn sunshine. We left mid afternoon richer for just dipping into Marseille with its incredible buildings and wonderfull setting by the Medditeranean.

On route home we collected our car from Avignon in between another brief visit to ' Leroy Merlin' arriving home just in time for Karen to prepare supper for friends who were coming to dinner. We had a lovely evening, outside, the Moon lighting the Luberon, which was in the Autumn Mist. They left shortly before 2am! Quite a full day!

Foolishly I had arranged a rendez-vous for 9am with someone to quote for our driveway and to put the road in on our plot. As it turned out he was the font of all knowledge and knows the neighbours to our land so can help with discussions on the drainage. His son-in-law is English and lives nearby, we were introduced through mutual friends. I think he will prove to be very useful for lots of our work. After we went to 'Mr Bricolage' where as luck would have it, we bumped in to one of the other neighbours who we needed to see. By the time we had chatted it was closing for lunch but we had a productive discussion! A fortunate meeting concluding a succesful morning. 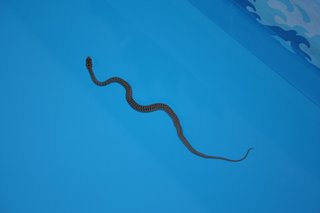 Oh yes, we fished this visitor out of the pool!
Posted by David at 9:40 am